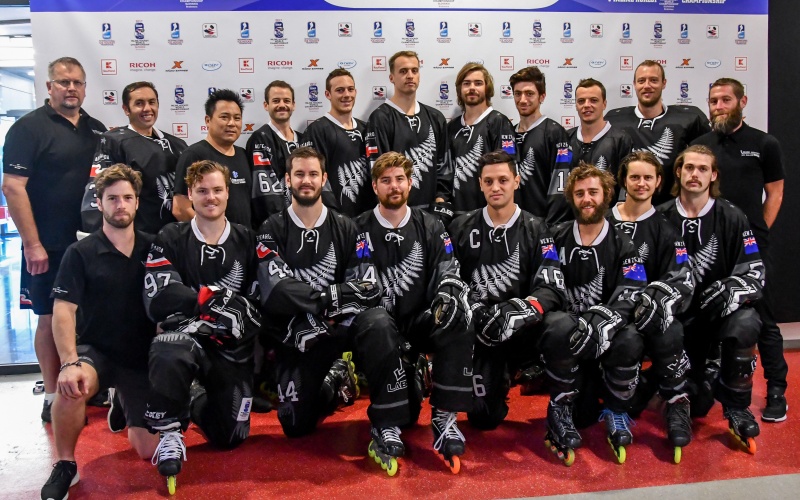 They gave it their best, it just wasn't to be. A very committed and prepared squad who may have come away defeated, but have come away with pride, showed strong work ethic and  were providing their best until the last "horn".
The New Zealand Senior Men departed Bratislava early Sunday morning after competition finished Saturday.

The team consistenly gave 100% to the task at hand. Under the guidance of their team management,  Bevan Varney (Head Coach),  Pete Shields (Team Manager)  and Gordon Tam (Team Doctor) against stiff competition with many other competing team rosters indicating top ice players from around the globe.
Travelling with their own doctor, Dr Gordon Tam,  endured the  players were kept in the game despite injuries and heat.
Alex Novak was injured preventing his particioation as a player, but attended as a technical assistant for the bench providing input and support.
New Zealand has been relegated along with two others. A qualifier will be required to secure a placment for Canada in 2019.  Discussions have already taken place. The qualifier competition now takes place in the alternate year to the world championships. There are three held globally, an Asian/Oceania, South America and Soutth Africa and European versions. New Zealand fit into the Asia/ Oceania qualifier.

As an observer at this event, the support shown by other countries, the organisers, family and our very own team officials and players cannot go without mention. The association are very grateful for the support and commitment shown by all.  New Zealand players are acknowledged  and admired for the barriers they overcome to attend this event. It is acknowledged that it comes at a huge personal financial commitment where funding is non-existent. Many of the attending teams are supported by various organisations, sponosrs, suppliers and sport the gear to go along with this.

Our sport is in its infancy when compared to nations in the top eight, many of whom do not have inline development programmes, have no junior or women players and simply come together to play this one event. Slovakia (as host) only have a month long inline programme annually in May. Many others dont even have that.  There was envy at the number of rinks New Zealand have access to, some countries have none or are restricted to a very short time where the rink is not required for ice.

While disappointing to be relegated much was gained, networking with other country administrators and coaches, experiencing the game at this level, observing the championship divsions and gaining the respect of others. while this campaign may have come to an end, the future looks positive.

Full details of results for all teams can be found : http://www.iihf.com/channels1617/inline/division-i/